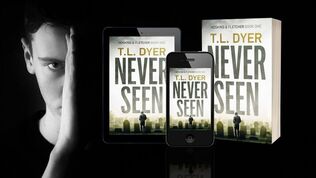 "Brilliant thriller for fans of Michael Connelly and Harlan Coben.
The twists and turns kept me reading for hours, and I cried at the end."​

​A man isn't born a killer.
Something happens to make him become one...
​
The victims are young men. Their killer drugs them and slashes their wrists. Then he cleans their bodies, combs their hair, and wraps them in protective sheeting before leaving them where they'll be easily found.

Is it a compulsion? A game? Or a brutally delivered message?

These are the questions homicide detective Lawrence Hoskins must answer as he takes on the lead role in his first serial murder investigation. But as the bodies keep coming he feels like he's the one holding the blade, the one standing between life and death. Under mounting pressure he turns to former colleague Cass Fletcher for help. She knows how a serial killer thinks and why they can't stop.
​If she can tell him why, perhaps it will lead him to who.

Except Hoskins has already made one mistake he's not aware of. Involving Fletcher is another. And as the killer continues to elude him, the case takes its toll in ways he never expects. More so when the signs start pointing in a new direction...

"Five beautiful boys lined up in a row
No longer unnoticed but seen by all
The officers who killed them soon everyone will know
Because the tougher they act, the harder they fall."

Never Seen is a gripping and chilling serial killer thriller, and the first book in the Hoskins & Fletcher crime series​
"I raced through this book.
​Loved the seriousness, the humour, the sadness."​
Downtown Bookstore
All Other Stores
Please note: As an Amazon Associate affiliate, TL earns a small commission on qualifying purchases.
​This is at no extra expense to the purchaser.
© T.L. DYER 2023